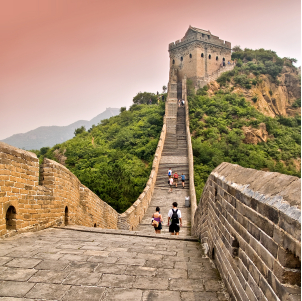 I listened to a very interesting podcast this week. It was an interview with the author of a book that explores the tension between old and new China – how China’s incredible economic expansion is at odds with one party rule. You can listen to it yourself here.

I had no idea about how fast China’s economy has grown. I mean, I knew it was fast but not the fastest growth in human history. This graph shows it quite well.  China has risen to be a world superpower with an economy that is predicted to overtake the US in terms of size within the next 5 years…. from an agrarian country where 15 million people died of starvation between 1958 and 1960.

This is why perhaps many westerners look to China with a sense of awe but also some fear.   It’s like watching a neighbour’s baby grow from an infant to a hulking adult in the span of 2 years. “That was amazing.. but what’s it going to do next?” And also why you can hear criticism when we see the remnants of an unfinished product... which seems unfair to me as we are comparing it to countries that have been industrialised for over 100 years.

What I like about China is not just the historical footprint of the world’s oldest civilisation, but the Chinese people themselves. They are at once proud but modest, family orientated yet ambitious, fun loving and above all focussed on learning. I’ll never forget the first time I experienced China immigration. I had a picture of scowling, gun toting autocrats scrutinising every page of my passport hoping to find a problem (yes my imagination is dramatic like that). But what I found was a smiling and efficient service, and one that asked my opinion of their work (every desk at the Beijing airport had one of these)

To me, the best way to explore a culture is from within. If you are curious about China as a work in progress, I would recommend you visit sooner rather than later. With the current rate of change, there’s no telling what it will look like in 10 years! And note, if you are not ready for the Full Monty of  China immersion, we have some new jobs in Hong Kong where you can dip your toe in the water of Chinese culture at your leisure.